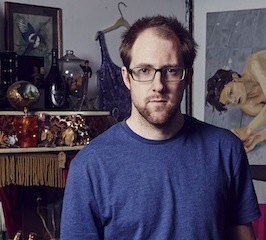 In just a few short years The Vaults, nestled under Waterloo station, has become one of London’s most exciting art spaces. It all started with The Vaults Festival which has rapidly become one of the capital’s largest Fringe theatre events, and have recently staged productions ranging from Goosebumps Live to a musical about mod icons The Small Faces. We chatted to founder and director Kieron Vanstone about the venue, its history and his dreams for the future.

London Calling: Can you tell us about the history of the venue?

LC: What is it about the underground that appeals to people?

KV: Interestingly at The Vaults, technically, you actually don’t go underground at all. It was built in 1848 and the Victorians wondered how to keep the train running when there were floods, so they lifted it all up. You never actually go down at all. You get this real loss of inhibition and exploration when you go underground.

LC: Were there any issues setting up in such an unusual location?

KV: I started without anybody else and I just had to do it all myself really. I had to clean everything, do all the production, finance, marketing. There were no particularly big hurdles, it was just all of the hurdles. The building was used to store paper for a long time so there was just one toilet in the whole building and a series of offices. All of our toilets are now weirdly kitted out like old school offices.

LC: What’s most exciting in your current season?

KV: Goosebumps is exciting because we’ve completely split audiences. I’ve never seen a show that some people absolutely detest while others adore it and come back three or four times.

LC: Why do you think that’s happened?

KV: If I knew why, I would definitely be a billionaire. A lot of people like it, a lot of people don’t. Goosebumps is the second best selling book series of all time after Harry Potter. We’ve also got ‘All or Nothing’ our mod musical inspired by the music of the Small Faces. It’s written by a lady called Carol Harrison and that’s been unbelievably popular. It sold out every night for eight weeks which is impressive for a new musical. I think it’s a testament to the music of the Small Faces and how popular it was.

We’ve also had a brand new audience come to the place. We pitch ourselves all the time for twenty to thirty year-olds but with this show you’ve got a range from forty to seventy. It’s cool to not be elitist, we do shows for everybody. It’s the same doing our separate Goosebumps kids show, they come in and are amazed, they can hear the trains, they go mental. Just like a 57-year-old who has never been under Waterloo station but they’ve walked past it every day.

LC: What about the Vaults Festival?

KV: We have a six week festival in March where there are about 20 shows a day. We turn most spaces into theatres ranging from 100 seats to 176 seats. It’s fringe theatre of very high quality. It’s about supporting the artists and making sure they don’t lose out, that they cover themselves. It accounted for something like 30% of all fringe ticket sales in London last year. The first was in 2012, before the venue opened. The Vaults Festival came first, when I was working at the Old Vic Tunnels. We opened up this space for the Vaults festival first for six weeks then we closed it down again. That was why we called the space The Vaults because the festival had already spread the name.

LC: A lot of venues are threatened by council restrictions and new construction at the moment. Are you worried about that?

KV: I’ve got a really good relationship with the council. I’ve been really careful and clear – I won’t just do a party or a dirty rave, it has to have some theatre and drama to it. That supports the community so they support us. If you don’t have the support of the surrounding businesses and neighbours then you’re in trouble. They’re the people you’re there to serve so if you stick out like a sore thumb then it’s going to go badly.

Saying that, some other venues were doing the best they could – like Shunt got closed because the Shard was built on top of it. No doubt the same will happen for Waterloo. There are masterplans for Waterloo up until 2050 so we won’t be around forever. In terms of footfall Waterloo is the biggest station in Europe, there’s an extra million people every year. We’ll survive as long as we possibly can and do as much cool stuff as we can in the time we’ve got.

The Vaults is currently showing Goosebumps Alive and Ministry of Masks. For information on upcoming events see their website.