The 2018 brief involved a mixture of racked and hand to hand distribution during the 4 months leading up to the show. Objectives were to reach 150,000 visitors to the show with a particular focus on advance sales.

Other key objectives were to target non-members, generate local awareness/excitement and ensure maximum coverage across London and the M3 corridor. London (South, West) and towards

Distribution should begin during the Easter weekend, and continue up to and throughout the show.
Quantities Posters – 750
Leaflets – 100,500

We targeted non-members and potential visitors through a mixture of print display, hand- to-hand and poster distribution. We enforced this through complimentary promotional activity on our editorial site londoncalling.com. We targeted the areas local to Hampton Court, suburban London and those areas indicated on the RHS heat map to generate excitement and awareness of the event. Additionally, we targeted audiences visiting other garden/landscaping shows and florists/garden centres who fit into the ‘Pretty Pride’, ‘Open Socialists’ and ‘Gardening Evangelists’ demographic.

Across the campaign we have placed print across neighbourhoods in London and the South East including Richmond, Kew, Guildford, Woking, Kingston, Battersea, Putney, Barnes, Wimbledon, Surbiton, Farnham, Alton and many more!

Across the 4 month campaign we serviced 1,750 different venues with RHS Hampton Court print.

This included poster coverage of 750 posters and distribution of 127,000 leaflets. 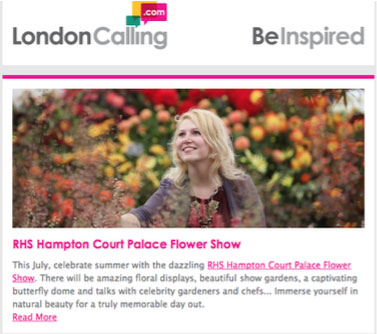 case studyAffordable Art Fair
case studyBristol Pride 2017
case studyCamden Farmers Market
We use cookies to ensure that we give you the best experience on our website. By clicking okay and continuing to use our site your are agreeing to these cookies being used. OkayPrivacy policy